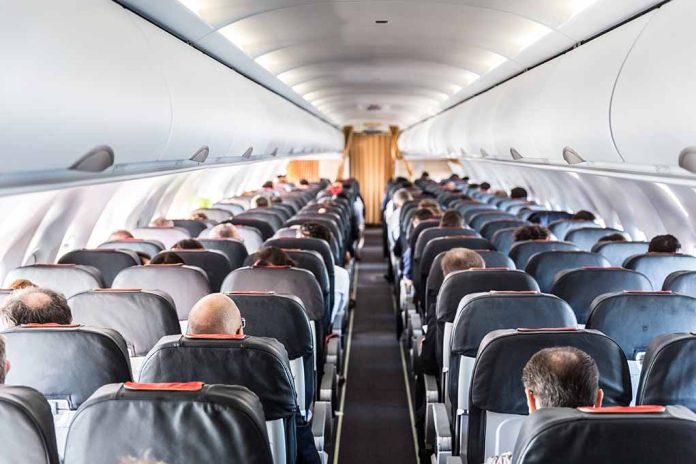 (UnitedVoice.com) – Airlines have reported more aggressive encounters on flights since the pandemic began. Those incidents don’t seem to have stopped now that much of the world has gone back to normal. A father is being hailed a hero after a scary incident aboard a recent flight.

In August, Phillip O’Brien, 35, was aboard a Jet2 flight from Cyprus to Manchester when a woman in her 30s began behaving erratically. She reportedly stripped to her underwear and started shouting “Allahu Akbar,” which means “God is great” in Arabic. The woman told passengers her parents were members of ISIS, the infamous terrorist organization.

According to O’Brien, the woman said she had explosives and repeatedly tried to storm the cockpit. She had children traveling with her and allegedly asked them if they were “ready to die.”

EXCLUSIVE: A dad of three heroically restrained a passenger after she stripped to her underwear and twice tried to storm a plane cockpit shouting "Allahu Akbar".https://t.co/7zptrs4Kjh

The father of three asked a flight attendant if they were going to do something to restrain the erratic passenger. The airline employee allegedly said they were not allowed to do anything. That’s when O’Brien took the matter into his own hands. He approached the woman and tackled her to the ground.

The pilot had already diverted the flight and made an emergency landing at Charles De Gaulle Airport in Paris, France, where police took the woman into custody. She now faces hefty fines and possible jail time. Authorities did not make her identity public.