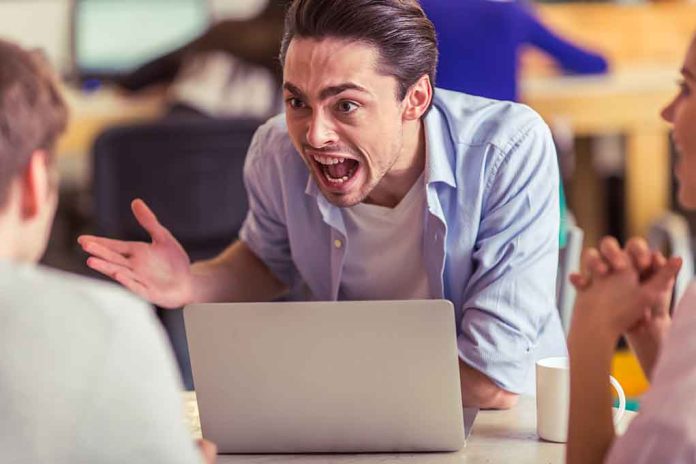 (UnitedVoice.com) – Are Democrats preparing to push a major scam on America? In the 2020 election, the Democratic Party promised to raise taxes on America. They claimed paying your fair share is the patriotic thing to do. My oh my, how the mighty have fallen. Or have they?

In warfare, surprise is the element of success. Today, no one is more surprised to hear some far-left Democrats talking about tax cuts than progressive voters let down by Democrats’ inability to shove through the most significant expansion of government in US history in 2021. On Tuesday, February 15, Democrats at a luncheon debated how to fight the GOP narrative advertising they are responsible for the skyrocketing inflation hitting Americans where it hurts the most. It appears the best they can do is come up with a tax scheme that contradicts their better inclinations.

Vulnerable Democrats Go Against the Party

Four vulnerable Democratic Senators are working overtime to trick voters into believing they changed their ways after a disastrous 2021 revealed their true intentions. Let’s remember, they passed a partisan $2 trillion American Rescue Act in March that was little on rescue and big on corporate handouts. Former Democratic Treasury officials blamed the resulting inflation squarely on the Democrats’ go-it-alone plan after warning the Left not to overheat the economy by flooding more money into it.

From the late summer through January, Democrats pushed down the initial $3.5 trillion package that Sens. Joe Machin (D-WV) and Kyrsten Sinema (D-AZ) to $1.75 trillion. Throughout, Manchin warned he was highly skeptical of passing another left-wing scheme that would transform society, the economy, and the government on another partisan vote. He cautioned that more massive spending would explode the national debt even higher and add to the skyrocketing inflationary pressures that wiped out wage gains by Americans over the last year.

On Monday, House Speaker Nancy Pelosi (D-CA) blasted Manchin and said he was wrong for saying the Build Back Better socialist dream package would raise inflation further. She continues to allege flooding trillions of more dollars into the marketplace would reduce inflation.

Well, it appears that vulnerable Democrats may do anything to win re-election, including tricking Americans into believing they are empathetic to America’s plight.

Now They Want a Tax Cut?

It’s truly unbelievable. Vulnerable Democratic Sens. Mark Kelly (D-AZ), Maggie Hassan (D-NH), Catherine Cortez Masto (D-NV), and Raphael Warnock (D-GA) are ready to manipulate voters. Of course, they say they are only responding to their constituents’ needs. These are the same people who advocated and pushed for Build Back Better, trillions of dollars in new massive deficit spending, and increasing taxes to pay for their wealth redistribution efforts.

Now, they want to eliminate the gas tax for up to a full year. So, they voted for legislation that caused inflation, voted for bills making inflation even worse, and now want to offer relief by cutting taxes that would cause the debt to increase substantially without cutting any spending. It could flood the economy with more money and make a bad problem even worse, under the guise of providing relief.

Rightly so, Republicans are exposing the Democrats’ scheme as a re-election ploy. Still, their real problem is inside their own party. Most Democrats have no desire to cut the gas tax for a year. Some say that will only benefit the oil and gas industry while incentivizing drivers to pollute the atmosphere even more.

Given the 50-50 makeup of the Senate, it would likely pass with GOP support. However, Senate Majority Leader Chuck Schumer (D-NY) would need to allow for a vote on the Senate floor. It’s not likely he would balk at the Left. Still, the hypocrisy label would likely sting them where it hurts the most if he did.

It’s a risk either way, but less risky to do nothing to help vulnerable Democrats who put themselves in this position in the first place by voting with the far-left. It’s noteworthy they say they are listening to voter concerns about rising costs? Where were they in 2021 when they ignored the warnings and pursued their radical agenda?

If voters fall for this, it isn’t because they had the wool pulled over their heads. Their eyes were wide open. It would be voter malpractice.